OPERATIONS OF CIVIL COURTS IN INDIA

The Constitution of Republic of India in its very structuring puts down certain framework in respect to the Indian Judicial System. The administration of our country is sensed upon the federal system of governance making the dispersal of power between the Centre and the States. Even so, the Constitution of India establishes a single integrated judicial system encompassing courts to administer both Central and State commandments. The apex court of India located in the capital of the country, New Delhi is the supreme court i.e., the court of highest appeal. The second most authority after the apex body are the various High Courts at the state level which function for one or more number of states. furthermore, down the line after these major bodies, establishments of the district and subordinate courts also prevails at the lower tier levels in the territory of India. In order to extend the functioning of the Courts, there exist specialised tribunals to adjudicate sector specific claims such as labour, consumer, service matter disputes. 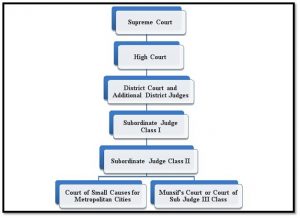 The civil court system of India is one of the most primogenital legal systems in the world history.  The respectful plays a significant element of the inheritance India proclaimed from the colonial rule in the regime of Britishers. The contemporary framework of the legal system in India is specifically pointed down in the Constitution of India where tremendous levels of the judiciary are elucidated in a hierarchical setup of establishments. These courts are majorly pointed above but will be elucidated in a pragmatic appearance below followed by a detail explanation of their functioning.

The apex judicial authority of the country i.e., the Supreme Court of India came into existence on the January 28th of 1950. It came into existence after substituting the two of them, the federal court system and the judicial committee of the privy council which were legitimately the supreme authority of the Indian court system at that time. The honourable Constitution structured in 1950 envisioned a little transformed civil court system. In the said specific, the highest court of appeal was the Supreme Court with a Chief Justice and 7 additional justices. nevertheless, the parliament of India assented the authority to increase the number of judges in the approaching years. In the contemporary situation, post the commencement of the Supreme Court (Number of Judges) Bill of 2019 into law, the judicial strength has been increased to 34 in number. The sanctioned strength of Supreme Court judges was increased days after the Chief Justice wrote to Prime Minister Narendra Modi to increase the number of judges in the top court.

As enshrined under the Article 32 of the Constitution of India [2], extends a wide-ranging original jurisdiction to the Supreme Court for the enforcement of fundamental rights of the citizens, through issuing directions, orders and writs. The latter is more commonly titled as, the ‘Writ Jurisdiction’. The appellate jurisdiction residing with the apex court of India can be prayed by an order approved by the high court. Appeals submitted to the honourable supreme court against the lower court of appeals can range from any judgement, decree or final order of the Court in both criminal and civil cases. Moreover, asper the Article 136 of the Constitution of India [3] the supreme court can even practice the wide appellate jurisdiction over all Courts and Tribunals. Underneath with its own sense of discretion, the Hon’ble Court may assent a special leave appeal to any decree, determination, judgment, order or sentence in any cause or matter passed or made by any Court within its own jurisdiction.

Alongside being an interpreter, as enshrined under Article 143 of the Constitution [4], the court of the highest appeal also acts as an advisor to the Hon’ble President of the Union of India. The official title for the said is “Presidential Reference” and is named as the ‘Advisory jurisdiction’ of the Court. With its proclamation, the supreme commander of the defence forces will have a choice to seek advice from the supreme court over a legitimate question of law or matter of public importance. Notwithstanding to the factum, it is in no needs and deeds absolutely binding over the highest legal authority to answer all of the questions. The reasons of rejection would be acknowledged if they stand in the fire line of political or socio-economic in nature.

HIGH COURTS ACROSS THE STATES

The union of republic of India comprises of 24 major High Courts at the states and UT’s level, each and every high court encompasses jurisdiction over a specific UT, one single state, or more than a single state or UT. Subsequent to the supreme court, the high courts are also the courts of record which enshrines them the power to punish for the contempt made to them. The very first high court of republic of India was the Calcutta High Court.

The High Courts of Calcutta, Bombay and Madras possess an original jurisdiction over the civil and criminal cases arising across their territorial jurisdiction. The Hon’ble High Courts enjoy the treat of power to hear civil cases concerning property worth over Rs.20000. Petitions on elections are also entitled to be heard in the High Courts. They are empowered to issue writs [habeas corpus, mandamus, prohibition, quo warranto and certiorari for enforcement of fundamental and other rights] under the Article 226 of the Constitution of India [1] and the matters of these writs unlike of the supreme court can even go beyond the umbrella of just fundamental rights; making its scope of authority wider than that of the Hon’ble apex court of the country.

If any individual finds the decision delivered by the respectful lower courts unsatisfactory, the concerned individual under the Appellate Jurisdiction of the High Court can make his submissions again with a proper procedure inscribed by law. An appeal can also be made from the subordinate court directly if the dispute involves a value higher than Rs. 5000/- or on a question of fact or law. They even possess a power of judicial review, the said provides the court of record to declare any law or ordinance null and void i.e., unconstitutional.

Underneath the functioning of high courts and the supreme court, in order to dispense justice at the very lower or district level, certain lower judicial bodies are incorporated. These lower judicial bodies are popularly known as the lower courts and comprise of; district and sub-ordinate courts. Each specific state is divided into some judicial districts whose authority is on the shoulders of the ‘District and Sessions Judge’. They are titled as District Judge in the civil related matter and in the criminal cases, the judges are termed as a Sessions Judge. 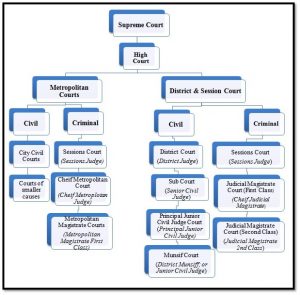 A District Judge is also known to be as a ‘Metropolitan Sessions Judge’ when the concerned holds a chair of a district court prevailing its jurisdiction in a metropolitan area. District judges may even dispense their authorities with Additional District judges, depending upon the judicial workload over the respectful court. Hon’ble District Judge is the highest judicial authority after the Hon’ble justice of a High Court. In some special cases, the presence of lower judicial authorities which are even lower than that of a District Court and the same are called as, Munsif’s Courts and Small Causes Courts. The aforesaid courts only have an original jurisdiction and can hear suits concerning only small amount matters therefore, they possess a very less pecuniary jurisdiction.

The district court comprises an appellate jurisdiction over all the lower courts within its own jurisdiction. Few special specific matters of the civil or criminal cases cannot be submitted in a court whose jurisdiction is lower than that of a district i.e., District Court.  An individual if left unsatisfactory can approach the Hon’ble high court under the umbrella of the appellant jurisdiction.